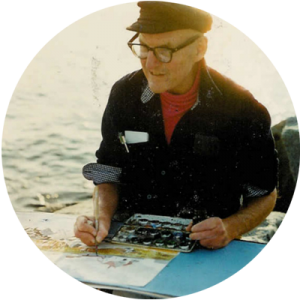 Rich Ahern was born Born on July 4th 1927 at Medford, Massachusetts, USA.  Rich Ahern was raised in Washington D.C.  He studied Architecture and Urban Design at the Massachusetts Institute of Technology and the Technische Hochschule of Graz, Austria, from which he received his doctorate in 1952. Here Presented here are lithographic prints of panoramic views prints of important universities, historic sites and urban and & rural landscapes which Rich Ahern drew with pen, ink and mixed-media between 1976 and 2000.As a pen and ink artist, Rich was especially attracted to pedestrian-oriented scenes that serve as centers or spines of human activity, —what might be called “outdoor living rooms” as frequently found in at the heart of college campuses.  He sought to portray the particular quality that permeated a scene, be it intimacy or majesty, serenity or vitality, formality or informality.  Rich   In any case, attempted to convey it is the relationship between buildings, landscapes, people and open spaces that Rich attempted to convey, rather that any single element in the scene.  “Unity in diversity” is a common theme in all of the his work.

In some scenes Rich imposed significant symbols or images of historic events or personalities onto the foliage or sky.  He termed these “perceptive perspectives” as they represent the reality or mental perceptions experienced by the viewer as well as the semblance of photographic reality (In most drawings one may spot the artist at work or carrying his portfolio.)

Rich spent from ten days to over a month on each drawing, whatever it took to do, never finishing a piece prematurely the best drawing possible.  Most of the work was completed on-site,“en plein air” rather than from photographs in a studio, as is commonly the case.   This was not only more enjoyable, but it afforded him the opportunity to observe and experience characteristics of  athe scene that could not have been seen perceived in a single visit.  It also enabled Rich to talk to with visitors about their views on foreign affairs, which he found helpful in served his main goal in life:, working for planetary peace through the creation of “A Paradigm for Planetary Peace”.

The Estate of Rich Ahern is pleased to present these prints in hopes that they will continue to enrich the artistic spirit.